Components and plugins are relatively new features of web2py, and there is some disagreement between developers about what they are and what they should be. Most of the confusion stems from the different uses of these terms in other software projects and from the fact that developers are still working to finalize the specifications.

However, plugin support is an important feature and we need to provide some definitions. These definitions are not meant to be final, just consistent with the programming patterns we want to discuss in this chapter.

We will try to address two issues here:

A component is a functionally autonomous part of a web page.

A component may be composed of modules, controllers and views, but there is no strict requirement other than, when embedded in a web page, it must be localized within an html tag (for example a DIV, a SPAN, or an IFRAME) and it must perform its task independently of the rest of the page. We are specifically interested in components that are loaded in the page and communicate with the component controller function via Ajax.

An example of a component is a "comments component" that is contained into a DIV and shows users' comments and a post-new-comment form. When the form is submitted, it is sent to the server via Ajax, the list is updated, and the comment is stored server-side in the database. The DIV content is refreshed without reloading the rest of the page.

The web2py LOAD function makes this easy to do without explicit JavaScript/Ajax knowledge or programming.

Our goal is to be able to develop web applications by assembling components into page layouts.

Consider a simple web2py app "test" that extends the default scaffolding app with a custom model in file "models/db_comments.py":

So far there is nothing special in this action, but we can turn it into a component by defining a new view with extension ".load" that does not extend the layout.

Hence we create a "views/comments/post.load":

For example in "controllers/default.py" we can edit

and in the corresponding view add the component:

will show the normal content and the comments component: 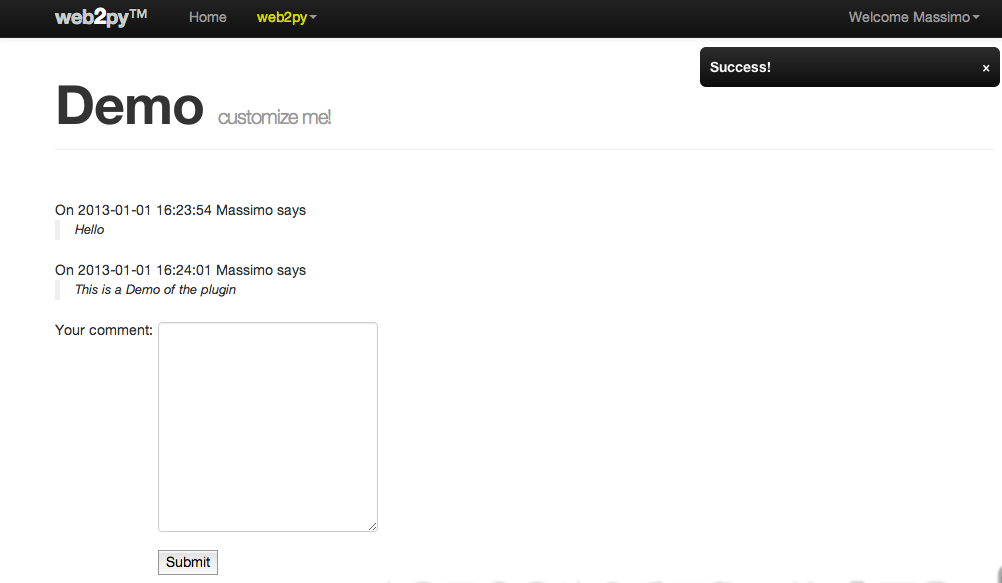 (the actual generated code depends on the options passed to the LOAD function).

The web2py_component(url,id) function is defined in "web2py_ajax.html" and it performs all the magic: it calls the url via Ajax and embeds the response into the DIV with corresponding id; it traps every form submission into the DIV and submits those forms via Ajax. The Ajax target is always the DIV itself.

The full signature of the LOAD helper is the following:

If no .load view is specified, there is a generic.load that renders the dictionary returned by the action without layout. It works best if the dictionary contains a single item.

Because Ajax post does not support multipart forms, i.e. file uploads, upload fields will not work with the LOAD component. You could be fooled into thinking it would work because upload fields will function normally if POST is done from the individual component's .load view. Instead, uploads are done with ajax-compatible 3rd-party widgets and web2py manual upload store commands.

When the action of a component is called via Ajax, web2py passes two HTTP headers with the request:

which can be accessed by the action via the variables:

The latter is also accessible via:

The component action can also store data in two special HTTP response headers that will be interpreted by the full page upon response. They are:

and they can be set via:

or (if the action is called by a component) automatically via:

As an example, let's define a contact form component in "controllers/contact/ask.py" that allows the user to ask a question. The component will email the question to the system administrator, flash a "thank you" message, and remove the component from the page:

The first four lines define the form and accept it. The mail object used for sending is defined in the default scaffolding application. The last four lines implement all the component-specific logic by getting data from the HTTP request headers and setting the HTTP response headers.

Now you can embed this contact form in any page via

Notice that we did not define a .load view for our ask component. We do not have to because it returns a single object (form) and therefore the "generic.load" will do just fine. Remember that generic views are a development tool. In production you should copy "views/generic.load" into "views/contact/ask.load".

user_signature
requires_signature
We can block access to a function called via Ajax by digitally signing the URL using the user_signature argument:

Normally a link is not trapped, and by clicking in a link inside a component, the entire linked page is loaded. Sometimes you want the linked page to be loaded inside the component. This can be achieved using the A helper:

If cid is specified, the linked page is loaded via Ajax. The cid is the id of the html element where to place the loaded page content. In this case we set it to request.cid, i.e. the id of the component that generates the link. The linked page can be and usually is an internal URL generated using the URL command.

A plugin is any subset of the files of an application.

and we really mean any:

So why is it called a plugin? Because it provides a mechanism for packing a subset of an app and unpacking it over another app (i.e. plug-in). Under this definition, any file in your app can be treated as a plugin.

When the app is distributed, its plugins are packed and distributed with it.

In practice, the admin provides an interface for packing and unpacking plugins separately from your app. Files and folder of your application that have names with the prefix plugin_name can be packed together into a file called: 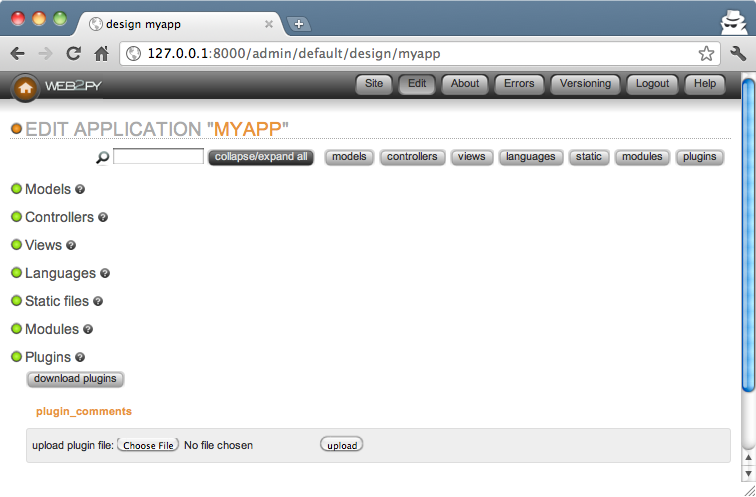 The files that compose a plugin are not treated by web2py any differently than other files except that admin understands from their names that they are meant to be distributed together, and it displays them in a separate page: 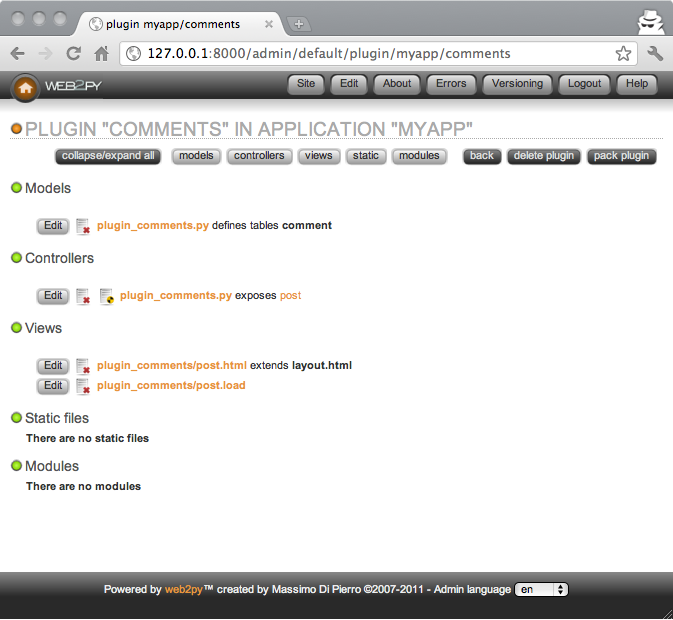 Yet as a matter of fact, by the definition above, these plugins are more general than those recognized as such by admin.

In practice we will only be concerned with two types of plugins:

By the above definitions, the components created in the previous section, for example "controllers/contact.py", are already plugins. We can move them from one app to another and use the components they define. Yet they are not recognized as such by admin because there is nothing that labels them as plugins. So there are two problems we need to solve:

Let's assume a plugin is called name. Here are the rules that should be followed:

Rule 1: Plugin models and controllers should be called, respectively

and plugin views, modules, static, and private files should be in folders called, respectively:

Rule 2: Plugin models can only define objects with names that start with

Rule 3: Plugin models can only define session variables with names that start with

Rule 4: Plugins should include license and documentation. These should be placed in:

Rule 5: The plugin can only rely on the existence of the global objects defined in scaffolding "db.py", i.e.

Some plugins may be more sophisticated and have a configuration parameter in case more than one db instance exists.

Rule 6: If a plugin needs configuration parameters, these should be set via a PluginManager as described below.

By following the above rules we can make sure that:

The rules above do not solve the problem of plugin versions and dependencies. That is beyond our scope.

Component plugins are plugins that define components. Components usually access the database and define with their own models.

Here we turn the previous comments component into a comments_plugin by using the same code we wrote before, but following all of the previous rules.

Second, we define a "controllers/plugin_comments.py"

Now we can use admin to pack the plugin for distribution. Admin will save this plugin as:

Of course we can make the plugin more sophisticated by having components that take parameters and configuration options. The more complex the components, the more difficult it becomes to avoid name collisions. The Plugin Manager described below is designed to avoid this problem.

The PluginManager is a class defined in gluon.tools. Before we explain how it works inside, we will explain how to use it.

Here we consider the previous comments_plugin and we make it better. We want to be able to customize:

without having to edit the plugin code itself.

Here is how we can do it:

First, rewrite the plugin "models/plugin_comments.py" in this way:

Notice how all the code except the table definition is encapsulated in a single function called _ so that it does not pollute the global namespace. Also notice how the function creates an instance of a PluginManager.

Now in any other model in your app, for example in "models/db.py", you can configure this plugin as follows:

The plugins object is already instantiated in the default scaffolding app in "models/db.py"

In particular each plugin file can make its own PluginManager object and register itself and its default parameters with it:

You can override these parameters elsewhere (for example in "models/db.py") with the code:

You can configure multiple plugins in one place.

Layout plugins are simpler than component plugins because usually they do not contain code, but only views and static files. Yet you should still follow good practice:

First, create a folder called "static/plugin_layout_name/" (where name is the name of your layout) and place all your static files there.

Third, modify the "views/layout.html" so that it simply reads:

The benefit of this design is that users of this plugin can install multiple layouts and choose which one to apply simply by editing "views/layout.html". Moreover, "views/layout.html" will not be packed by admin together with the plugin, so there is no risk that the plugin will override the user's code in the previously installed layout.

While there is no single repository of web2py plugins you can find many of them at one of the following to URLs:

Here is a screenshot from the s-cubism repository: